This post has been a long time coming, since R. David Murray and I taught the bootcamp on 8/21-22/2014. Sadly, I’ve been struggling with wrangling my own data, collaborators, going to NSF, planning sampling trips, helping to train the new undergrads in the lab, and about 1000 other things since then. Luckily, no one reads my blog.

The planning for this bootcamp came together very quickly, and I think all parties can agree that some things could have been tightened up a little bit. With that said, I think it went off really well. It was an amazing experience both as a scientist to be immersed in that stimulating of an environment and as an instructor having the good fortune of a body of students so excited and (dare I say) hungry for the material. I was extremely proud to be representing Software Carpentry, and I hope we did the name justice when all was said and done.

If you’ve ready my bio, you already know that I lived around the Philadelphia area for several years before moving to Richmond, VA. It was great to be back in the city and having dinner at old (Monk’s Cafe) and new (Crow and the Pitcher) places. The folks at Penn were able to secure us great rooms at Club Quarters, too, providing a great walk over to campus to begin and end the day.

David and I arrived early on the first day in case anyone had issues with getting the required software up and going before we got started. No one really needed our help for this part, so we spent the time getting our laptops connected to the projector, finding the chalk (I love chalk!) for the boards, and planning the day. We settled on each teaching for 1/2 of each day with David handling Bash and Python and me up for git and SQL. I sent out a few tweets about this, but I feel like we (myself included) were all quite fortunate to have a core CPython maintainer going over shell and Python lessons. Having not taught a huge amount (by his own admission), I thought David delivered all of his lessons with an expected level of mastery. That afternoon, I taught the git material, but perhaps in a different way than before.

We needed to distribute the examples to the course participants, but when I went out to the bootcamp site, they already had the examples worked through in the lesson notebooks. As a quick hack, I set these up cleaned versions using another IPython notebook to run through the examples in the bootcamp course material and strip out the output cells and zip it all up nice and pretty-like. Seemed to work pretty well, so if anyone wants it, please feel free to use it. Moving forward, it would be nice if we had clean versions committed to the repos from the start, I think.

Throughout the instructor training (did I mention this was my first time teaching a bootcamp?) and after, it was never clear to me the direction with which the lessons were to be delivered. It seemed to be entirely up to the particular instructor, a situation in which I’m very comfortable, but I didn’t want to step on any toes. Reading through the git material, I thought it would make much more sense to, sort-of, pseudo-flip, the lesson material. In this way, I could introduce some of the material (say 15 minutes a time) and then set the bootcamp attendees off and running with the lessons as lined out in the course material. I also paired them up to work on a collaborative scenario in which the work done in previous lessons was shared via pull requests to their partner’s repository on github (which also got them all github accounts!).

In terms of my own delivery, I did something perhaps unorthodox. I taught git without a GUI and without dropping to the shell. Instead, I used an IPython notebook. Well, not just a plain notebook, but one with Damian Avila‘s live reveal slideshow extension and the %rehashx + %automagic on magics. I did this for a couple of reasons: 1) to introduce the students to the IPython notebook which they would be seeing when David taught Python and 2) to have a continuity in my lessons without having to have presentation slides dropping out to a shell and back again. I was very pleased with out it all went down on this front - there were some minor glitches related to the projector and getting confused with too many Google Chrome windows, but that was all quite self-inflicted. Having a ready shell integrated with presentation slides was, from my point of view, a pretty effective way to deliver the material. I would welcome feed back here, especially from the bootcamp participants on how it actually went over. The notebook containing the slides can be downloaded here.

So, with that out of the way, the git lessons in the course material were already quite solid, so I didn’t really add anything there except to pair the students up for pushing and pulling in two common collaborative models: 1) granting access to collaborators to your own repository and 2) forking a repository and submitting pull requests. We discussed the safety and pain of both approaches and from the comments and questions, it was pretty clear to me that we accomplished several things:

It was great to hear the immediate feed back from both PIs and their students that the skills we were presenting to them were going to be put into practice immediately, a fact that’s both stimulating as an instructor and satisfying as an advocate for best practices in the real world.

The room and the Etherpad

As with most Software Carpentry bootcamps, we set up and monitored an Etherpad. I thought this was particularly effective, especially given the room setup. 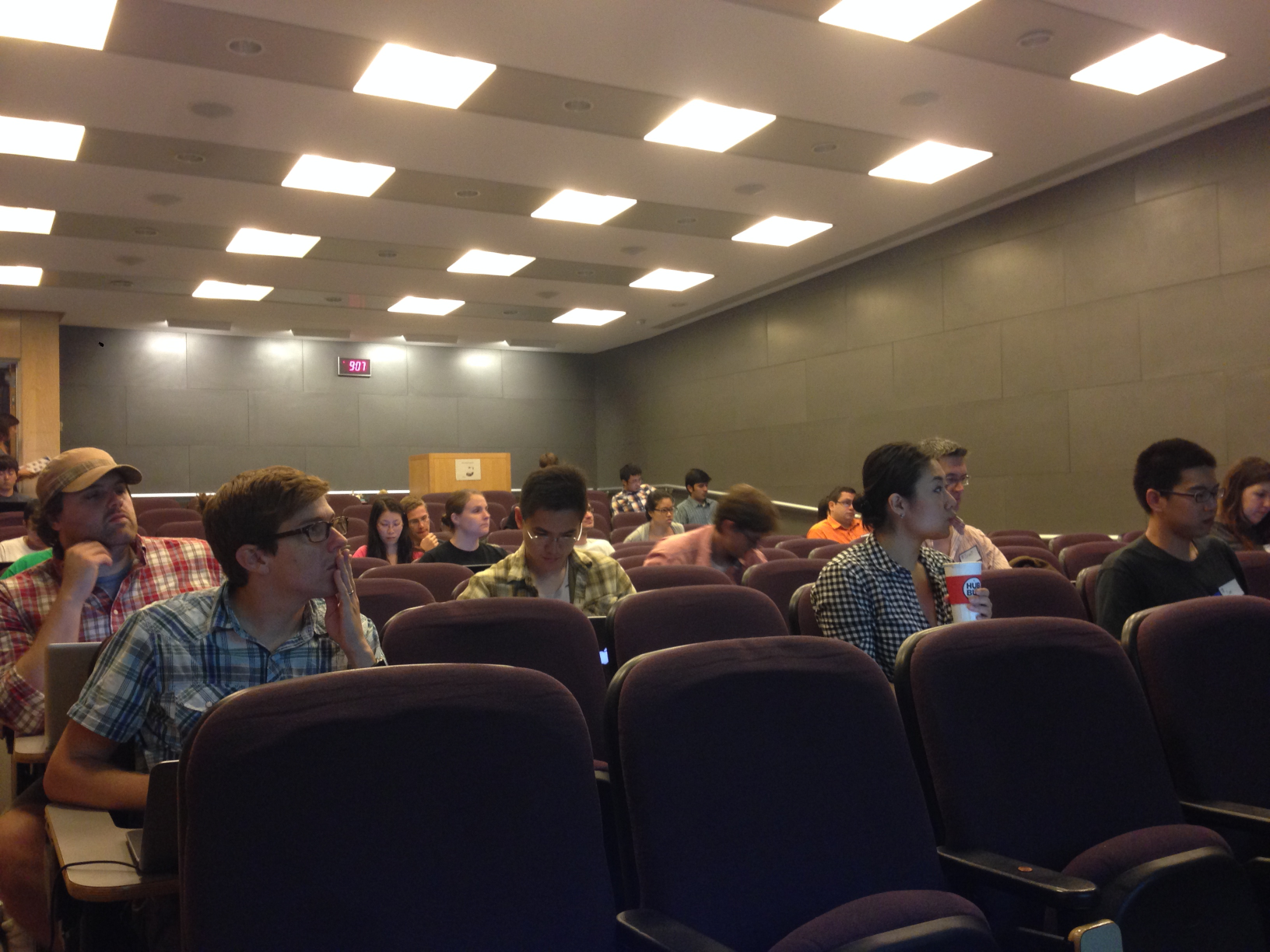 Unfortunately, what I alluded to earlier about some of things not coming together as they normally would have given more time, is that we were allocated an auditorium setting in which to run the bootcamp. This meant that it would be difficult for us to get to students in the middle of the rows to help them, and also that the highly effective “Post-it barometer system of understanding” could not be used because we couldn’t see people’s laptops to which the notes would be stuck. This is where the Etherpad came in, much more so on day one than day two (not sure why). I was able to answer many questions on it while David was teaching. David was able to monitor it while I was teaching as well. I’ve heard reports that instructors often keep their own copy open while they’re lecturing, but I think that, for me at least, it would be really distracting. Having someone else there to monitor it was really helpful. It’s also a great resource for data mining and adjusting lessons in the future, though I will admit that I haven’t had a chance to go back to my slides and adjust. All in all, the room worked out fine, so if there are reservations about this in the future, it turned out (at least for us) to be not that big of a deal.

I attempted to live tweet while David was teaching as well as encouraging others to do so, as well. However, it seemed like our audience wasn’t too into it, so I personally devoted most of my time to the Etherpad. It didn’t stop me from sending a few tweets out, though. I think in the future, I’ll make more of an effort to get participants to do this, as it’s a great motivator for instructors to do well and is great free promotion for the organization.

Day two started off with David teaching Python. We agreed that he’ll likely also take some time after lunch, and took a quick poll to make sure that everyone was cool with maybe having a little less time with SQL in the afternoon. We polled also to make sure that SQL was something that they wanted because David and I kicked around spending the whole day on Python. We all agreed: rock through all of the Python and then introduce as much as spastically (because I was teaching?) possible the SQL portion. Again, David did a great job explaining core Python concepts to everyone, and I had very little to do expect to chime in with some cool tidbits about the notebook I’ve come across since it’s a hugely important part of my daily workflow. I also got to talk with some of the participants about remote notebooks and submitting jobs into a cluster batch system, functionality that not only to people not realize is there, but also how harnessable it all is once you know a little bit about the IPython ecosystem. I get way too excited about it, too, which I’m sure is annoying, but I won’t apologize. IPython changed my life. There, I said it.

I wrapped up the day by teaching through the SQL lessons, actually using the delivered bootcamp material rather than my own slides like I did with the git lessons. We went fast, but I tried to be engaging and informative. I tried to drive home some of the inherent coolness of databases in general and how they can immediately be applied, as I have done, in common next-generation sequencing and phylogenetics workflows. In a room full of material scientists, I was even able to find a fellow phylogeneticist to talk to about how I handle some of my data in git, Python, and SQL (Dogfooding, at it’s best).

I really enjoyed teaching this bootcamp and getting to geek out with fellow scientists for a couple of days, especially with scientists who work in completely different areas than my own. The attendees made this bootcamp great, too, as would be true with anything like this. They were excited, engaged, had great questions, and were totally appreciative of our time. It’s not usually the case that one volunteers (at least for me) with the idea that they should be showered with praise, but it’s really rewarding when you know your time was well-spent.

It was great to meet and teach with David, and I learned a lot from watching him teach a subject in which he is an expert. I also enjoyed our conversations walking back to the hotel from campus. It would be a pleasure to teach with him again, and I have absolutely no reservations in recommending him as an instructor for future bootcamps.

In the future, I’ll also make sure to do a better job to express the importance of both the pre- and post-bootcamp surveys.

I especially want to thank Doug J., David S., and Charlotte M. for taking such great care of us while we were there. From getting us going in the rooms, to arranging lodging, and providing us with amazing students, satisfying lunches, and completely essential coffee breaks, it was a top-notch, class-act all the way. Thank you, thank you, thank you.

Though my schedule is kind of absurd these days, I’ll be sure to carve out as much time as I can in the future to be able to teach one of these bootcamps again (and hopefully it won’t be too long, hint.). It was privilege.